Changes to come in the Religious Studies Department 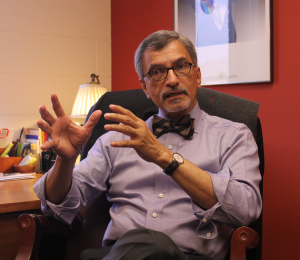 Next semester two of the three Religious Studies professors will not be teaching, but the program will still remain despite the small number of professors available.

“Students should understand that the transitions that are going on will not change the department,” Hemchand Gossai, Ph.D., professor of religious studies, said.

Both Gossai and Nicole Karapanagiotis, Ph.D., assistant professor of religion, are leaving for different positions outside GSU.

The plan is to have two temporary professors to fill their positions until permanent replacements are officially hired. Classes that students have already signed up for under the leaving teachers will still be taught in the fall semester.

“The great thing is there might be new offerings for students as well. I think it’s important to have a variety of perspectives and a variety of courses,” Karapanagiotis said.

Both Karapanagiotis and Gossai had taught what was required in order to progress the program, eventually leading to other courses that are available in other areas of religion to further expand the program.

“I would like to emphasize that this is a program that is really well grounded and growing, not just our word but is a remarkably vibrant program that has deep roots now,” Gossai said.

“The heart of the program is the students and that’s not going to change,” Karapanagiotis said.

“Being here has been an extraordinarily wonderful thing for me with friendships and most of all, there is no close second, the relationship with students and the commitment with students.”

“It has mattered to me that my years here be fruitful years, personally and professionally”

“Hands down it has been the students, to be able to see the growth, to see the changes, to see the wheels turning, to see wonderment, to have conversations, this is why we teach.”

Will be the associate dean of Northern Virginia Community College

“I don’t teach the students at Georgia Southern as just bodies in a classroom, I see them as my peers and colleagues and have full discussions. I am really going to miss them a lot.”

“I have been shaped by the students here in a way I will never forget and it is a part of who I am now.”

Will be going to Rutgers University to teach courses similar to the courses she teaches here.