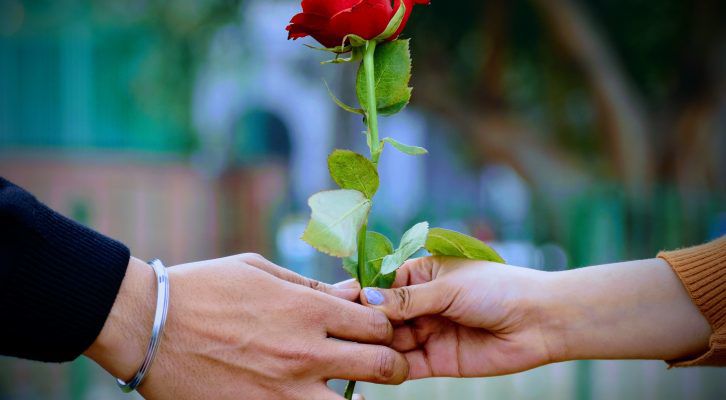 As Chris Harrison would say, this was the most dramatic episode, and honestly, I wouldn’t disagree with him. This episode has a lot of twists and turns and football. Yes, football. These girls get down and dirty and beaten and bruised for Peter, but will it be worth it in the end? So, sit back and pop open a bottle of wine, and let’s recap episode 4.

The house this week was calm and smooth sailing after Peter sent Alayah last week, and the girls seemed to be settling comfortably in their L.A Mansion, but this doesn’t last long. When Chris Harrison shows up at the mansion he lets the girls know that they need to pack their bags because they’re headed off to *drumroll* Cleveland, Ohio!

Peter decides that, for their first one-on-one date, he’ll take Victoria F. to Cedar Pointe Amusement Park, and then drinks afterward. I will say that this has been my favorite date Peter has been on the whole season because the two actually talked and had a real conversation other than talking about their “connection.”

The date is smooth sailing until Peter surprises her with a private Chase Rice concert. What girl wouldn’t love that?! Well, it turns out, out of all of the country music artists in the world this country music artist happens to be Victoria F.’s ex-boyfriend. The devil works hard, but these Bachelor producers work harder.

After the concert, Chase and Peter share a few words, and Victoria has a freak out session. She knows she inevitably has to tell Peter and talk to Chase.

Her conversation with Chase is actually positive. We learn that both Chase and Victoria F. had no idea that they would possibly see each other, especially on this date. In the end, Chase encourages her above all to just be real with Peter.

Victoria F. finally breaks the news to Peter (after he said Chase Rice could perform at their wedding), and well, to me, the whole thing was very dramatic. Peter Seemed really confused by everything, and for the first time is actually frustrated with the producers. Through all the awkward moments and run-ins, Victoria F. does come out on top with the date rose.

This group date was a large one. It included Victoria P., Kiarra, Kelly, Deandra, Madison, Lexi, Shiann, Tammy, Sydney, Hannah Ann, Savannah and Mykenna. They meet Peter at Cleveland’s FirstEnergy Stadium, better known as a football stadium. The girls aren’t there for a leisure date. Turns out, they’re there to play for Peter’s heart.

The girls are split up into teams to play a good old fashion game of football, and whatever team wins gets extra Peter time. These girls are out for blood. The Super Bowl has nothing on the Bachelor Bowl.

These girls gave it there all and it ended in a tie. The tie didn’t sit well with the girls, but at least they all get Peter time.

The group cocktail party is going well, and every girl is actually looking at having some time with Peter, but nothing is ever calm for long in Bachelor Universe. Our favorite villain is back! Alayah!

She crashed the date to defend herself from last week, and if she has to bring others down to do it, she will. The unlucky girl in the line of Alayah fire and fury is Victoria P. Last week Victoria P. claimed she barely knew Alayah but knew she was bad news. Alayah is back to prove Victoria P. wrong and in a way, she succeeds in this. . It turns out they knew each other a little better than Victoria let on.

In the end, Peter ends up giving the date rose to Alayah, who, I may state, didn’t even go on the date. He does apologize to the other women on the date. I wasn’t even on the date and I’m mad, so trust me, these women are not having it.

As the ladies are waiting to get taken back to the hotel, Alayah starts stirring the pot. She states that since being in the outside world she learned some things. Things like the whole Victoria F. and Chase Rice situation. She starts spilling that news to everyone.

The second one-on-one date goes to Kelsey, but before the two could have their fun Peter opens up to her about inviting Alayah. Peter braces for her wrath, but Kelsey is surprisingly really okay with it.

With that out of the way, the two can enjoy their date exploring Cleveland! The two polka dance, share some frozen yogurt and just happen to get involved in a soap-box derby.

Things, of course, take a serious turn at dinner when Kelsey shares the difficulty she went through during her parent’s divorce. This openness earns her the date rose for the week.

While Peter was on his date with Kelsey, the drama was brewing at the hotel between Victoria F. and Alayah. Victoria F. learned that Alayah shared her business with all the girls and is not happy about it. Victoria F. marches right to Alayahs hotel room and demands an explanation. Alayah’s excuse is that she didn’t know everyone didn’t have a clue. Alayah, no one has their phones. How would they know anything?

Tensions rise even higher at the pre-rose cocktail party and the ladies are ready to rip Peter a new one because they feel disrespected, and, honestly, I don’t blame them.  I mean look at Natasha. She is ready to share it all with Peter.

Peter gets a rude awakening for his actions. Before he can even start talking to girls, they begin to lay into him. They tell him that they’ve never felt so un-recognized and hurt by his actions. Peter apologizes, saying “he is not perfect.”

You know that Peter royally messed up when even sweet Victoria P. doesn’t want to speak with him but ends up having a little chat with him anyway. She states that he is being manipulated and even shares that Alayah who? is already starting drama with Victoria F., and before getting dragged into this drama, she quickly replies, “Talk to Victoria F. about it.”

Alayah is getting attacked by most of the girls in the house, and Peter is seriously rethinking his decision to bring Alayah back. “I’m worried that all these girls are just gonna walk out,” Peter says. “I feel like they’re so very disappointed in me, and I get it. I don’t blame them.”

And with that, the episode ends with To be continued…

So we all have to wait until next week to see if Peter comes to his senses or if any girls walk out on him.