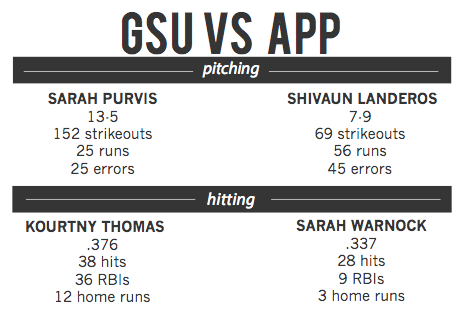 That is what happens when two teams with talent are such strong rivals. With this season being the last one for either team in the SoCon, these two teams will more than likely show mixed results like the three previous seasons.

GSU has the edge over App this season, though; the Eagles are number one in the conference, while App’s 3-5 record sets them at fifth in the conference. In the Eagles first conference series against the University of North Carolina at Greensboro, they lost their third game, but since then GSU has been able to sweep every other SoCon opponent.

App. State, on the other hand, well let’s just say it hasn’t swept anyone and more than likely it won’t. Their last conference series was against Samford University, and the Mountaineers lost all three games, only posting two runs.

While the Eagles are already looking like a stronger team, it’s a fact that in this series they will be the more rested team. GSU has an entire week to prepare and practice for this series, while App had a doubleheader on Wednesday against North Carolina Central University.

The easiest comparison to see that the Eagles are the dominant team is in the circle. Senior Sarah Purvis out-pitches the Mountaineers best pitcher, sophomore Shivaun Landeros, by a landslide. With a weak pitcher for App, GSU will look to their power hitters to take advantage of that and post high numbers for runs every game.

Senior infielders Kourtny Thomas, Shelby Morrill and freshman infielder Morgan Robinson are just a few hitters for GSU that all blow every App hitter out of the water. The Eagles need to stay consistent, stick to their game, and, possibly, these games could be an easy rival sweep.

The Eagles will face off against the Mountaineers on Saturday for a doubleheader starting at 1 p.m. then again on Sunday at 1 p.m.