Q&A with the SGA candidates 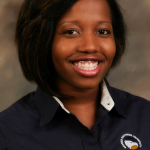 student government presidents from around the state. What initiatives from

Georgia Southern Student Government Association would you recommend to

other student government associations presidents from around the state?

Azell Francis: “One of the initiatives that I would encourage them to do is our Eagles

for Eagles program. Eagles for Eagles is a initiative to raise funds for students in

Jacob Jay: “As a freshmen senator, I have seen a lot of good things that SGA has done,

things. So I would second that.”

improve on next year, should you be elected?

Jay: “I believe that transparency is the number one thing that we need to improve

on. Transparency is the key issue.”

Francis: “If I can think of one thing I would change, it would be to ensure that every

recognizes and embraces that responsibility. That mandate to lead students, to

represent students and to continue to unite Georgia Southern University.”

I’ve heard both tickets mention transparency. Please give us a couple of

examples of how both of you plan to be transparent.

Francis: “I think transparency would be using that resource, using The George-

Anne. We as the Student Government Association represent all of the students, so

we need to make sure we reach out to them in any way or capacity. Other things we

can do [are] at the Office of Student Activities. We have over 250 organizations on

campus, so going to those SOAR leadership workshops, as we do now, continuing

to recognize that we are students. Yes we’re SGA. Yes we’re government, but we

are Eagles first, and we need to make that all of our Eagles know that and all of our

students come to us to solve our problems.”

go to organizations as SGA president and say ‘Listen, SGA is here for you. We are

a community organization.’ I would like to challenge my executive board to go out,

as well as senators. Senators should be going out right now. And making sure that

senators are going out, making sure the executive board is going out. We need to

make sure that we are going above and beyond for that organization.”

What experiences have prepared you for the role of executive vice president,

and how have those experiences impacted your leadership?

Madison Bajc: “I have been able to serve on student government for the two years

so I had the opportunity to come from a diversity experience. I’ve been able to meet

people from multiple cultures and people who have varying different opinions, and

part of what executive vice president does is mediate all of those opinions. My goal

is to make sure that all of those opinions are heard.”

Ellen Hogan: “As my current role as vice president of finance, I’ve had the honor

receive funding. Throughout this role I’ve really learned to communicate well with

organizations and individuals, and as executive vice president you have to be able to

communicate with senators. You have to be able to have conversations with them to

In your experience with Student Government Association, what has been the

major challenge to the overall success of the organization relevant to its goal?

Hogan: “Each year we raise the bar that much higher for ourselves. A challenge has

year we’ve made groundbreaking success with the first Fund Fair, the first State

of the University. The challenge ahead comes with we’ve made great success, it’s

hitting that next level, and that’s what we’re looking forward.”

Bajc: “Something that I think that continues to be an issue with student government

what SGA is, they don’t know.”

As an average student, I don’t see a lot about student government, so how will

Hogan: “This year we have made groundbreaking movement in how we’ve moved

a biscuits to students, and the requirement to get that biscuit is to like something:

you’re interconnected with us. That way you get to use social media, and that way

we get to expand on social media.”

Bajc: “We have looked to how we can group up major problems that we have here

on campus, not just what student government deals with, but what the common

ones that we get from students tend to be. For us, those things are campus safety,

transparency, as well as communicating this outreach, and we want to improve

upon all of these things by creating something tangible.”

With the new Quality Enhancement Plan Discussion, how will you help the

Errol Spence: “I would say the main two points to helping the QEP committee gain

student support is awareness and understanding. We want students to understand

that effective writing is supported from this level on in your life. The main means

James Woodall: “Bringing in people that we can relate to and say this is necessary

mindset of what it means to write because there are different types of writing.”

With the new tobacco-free policy going into effect this year, how do you plan

Charles Glover: “The best way to educate students would be utilizing the senate and

educate students about what’s going on campus. I feel like we should keep on going

Cliff Padgett: “Social media is a great way to translate our ideas to the student body.

Sheila Francois: “We need to get involved with SOAR. We need to go ahead and get

involved in the beginning with these incoming freshmen and sophomores.”

accessible to upperclassmen in their dining plans?

Padgett: “A lot of different restaurants are popping up on Fair Road, and that’s

facilities. Our revenue is up, but that’s just because we’re charging more to

Francois: “I just think that we need to go back to the old meal plans. We should go

Glover: “My idea would be to use dining dollars to be something reminiscent of the

What would you do to improve the bus system here at Georgia Southern?

Francois: “I think that between certain hours there should be extra buses in the

morning, especially between nine and twelve o’clock, and maybe in the evening

during the decrease. But I would certainly say add one more bus during the busy

hours of morning and two o’clock.”

Padgett: “There’s a lot of maintenance issues that they’ve been having lately, but

also I would refer [students] to download the app that they have.”

accordingly as Francois also said. But, at the same time, if there’s a need for more

buses then please voice that. But I will have to explain to you that more buses would

mean a little extra dollars to your fees.”

Some students may be unaware that student government gives funding to

individuals and organizations. How do you plan raising awareness of these

opportunities and increase the number of students and organizations that

Kaitlin Kidwell: “I want to reach out to the Office of Student Activities, and I want to

create a better relationship with them. I think it’s really important for the Office of

Student Activities to understand exactly what SGA does. I think that creating a better

relationship with that office would really give visibility to us.”

Rodrick Leary: “I would like to go out and meet with organizations and have the

FAC, which is the Financial Advisement Committee composed of senators from

every college. I want them to feel empowered to go out and meet with organizations

and inform different organizations about fund requests, because too often we have

the same organizations coming to FAC to apply for funds, and I think we should do a

Will McKinney: “We need to make sure [organizations] are aware that we are there,

and that we can offer them funding. And since they don’t necessarily know that we

are there, we need to reach out to students where they are. I think we need to have

we can offer them funding, we’ll gain greater support from student organizations.”

why you are the best candidate or ticket to be elected.

“SGA, as I’ve said, represents the students. We are the student voice, and this year

we’ve started to rebrand our organization. So what we have done is really lay that

foundation. Rome wasn’t built in a day, so we definitely need to continue, and

there’s much to be done, much progress to be made. But as the representative of

students, what would be most important is that student need. So I think if we can

pick any initiative that we could continue with, it would be our Eagles for Eagles

program. Eagles for Eagles is SGA’s newest initiative, and what it is is a team of

students geared towards fundraising. Fundraising towards not just any cause,

but for the cause which is the student need. As Eagles, if an Eagle is not able to

financially afford to be a part of our great university, we must do what we can

to help that Eagle. Eagles for Eagles is student-giving in action. It is truly service

oriented, which is what’s at the heart of SGA.”

“I think you guys should support our ticket, not only because we’re asking you

to. I’m not going to sit here and say ‘I want you to vote for me’ because that is not

up here, but rather it’s about the opportunity for you to become better than you

are now. It’s about the opportunity to all be included in what Georgia Southern

go and say ‘Hey I go there.’ Georgia Southern is not an idea. It’s an opportunity to

enhance your life. It’s a chance to be great, and so with that being said, the reason

opportunity to engage the community. And one thing tangible that we can do here,

I read it in The George-Anne this week, and it’s something that I’ve been thinking

about over and over again, what can we do to make it more fun, more enjoyable.

Let’s have a night on the town. Let’s do something where all students of all color, of

all sizes, of all backgrounds can come together and truly enjoy each other. I think

that are here, with these people, we can make that happen.”

Will McKinney on behalf of The Gentlemen’s Ticket

experience being on committees and also being members of COBA, ideas that we

can bring to these positions. I know I’ve got several things if elected that I would

like to implement to the vice president of finance. And Cliff does have great ideas for

dining, transportation, all sorts of things to bring to our auxiliary affairs.”