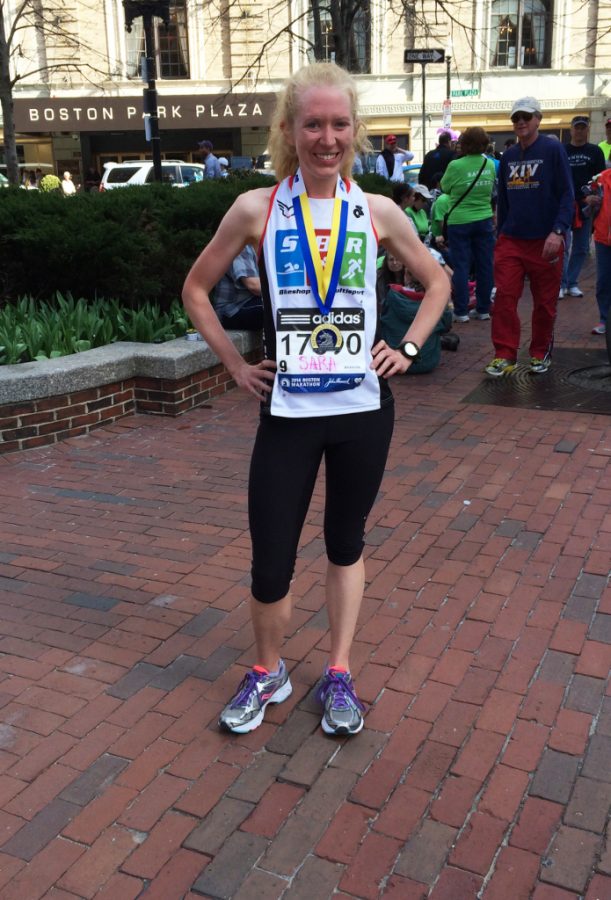 Just one year after the Boston Marathon bombings, Georgia Southern University had one its very own travel 1,040 miles to take on this great feat.

According to second year graduate student, Sara Rothberger, the atmosphere of the Boston Marathon is unlike any other. Spectators lined the road for the entirety of the 26.2 miles. All the while, cheering and shouting the runners’ names. The support that filled Boston could not be compared to any other race.

“I think it was actually one of the best years to run. Just because everybody was so supportive of everyone else. It was just a very positive environment,” Rothberger said. “’Boston Strong’ was posted everywhere on buildings. People were chanting it in streets and stuff and all the runners were really excited to be there too, whether they had run Boston 15 times or this was their first time.”

Although the Boston Marathon bombings of 2013 were in everyone’s minds throughout the day, the runners did not seem fazed. This year’s race was a sort of dedication to the runners and spectators that were injured or killed during the previous year and everyone in Boston could feel that.

“Just the whole energy of the city was intense. And how everybody just kind of fed off of what happened last year and being mindful and remembering the tragedy that did happen, but also wanting to show that runners are strong and resilient and they can overcome any obstacle that’s thrown at them,” Rothberger said.

After seeing the finish line for the first time in Boston, the experience became very real. Rothberger began to get emotional and realized that she had just completed her best time running a marathon.

“I wanted to be around the 3:35:00 range. That’s what I was shooting for. But I knew that with this race I had already done all the hard work to get there so I just wanted to enjoy it as much as possible,” Rothberger said. “Having said that, I’m pretty competitive with myself. I just push myself, so I actually ended up getting a personal best time this year at Boston by 58 seconds.”

Rothberger was able to complete the 2014 Boston Marathon with a personal record of 3:30:47. She says her mother is her biggest fan and was there to greet her with a hug as she finished the race.

“It’s been a lot of work and my mom has definitely seen that,” Rothberger said. “That was another really great experience too. The first time that we saw each other and she gave me this big hug and told me how proud she was.”

Though Rothberger did very well in the Boston Marathon, she could never picture herself running one. However, after completing her first full marathon in January of 2012, she knew there would be more to come.

“After I crossed the finish line I was hooked. It was an incredible experience. The training and going through the race itself,” Rothberger said.

To her surprise, she qualified for Boston while running her second full marathon at the Savannah Rock ‘n’ Roll Marathon in November of 2012.

“I just wanted to beat my previous time. And then during the race I noticed that I was able to hold a pace that was pretty steady, because I wear a Garmin watch to track my pace and time and everything, and I realized that, wow, I could actually probably get the Boston qualifying time if I push through some of these miles,” Rothberger said. “I didn’t really decide that I wanted to try and qualify until I was actually running the Savannah marathon.”

After pushing through the last few difficult miles, she finished with a time of 3:32:41. Rothberger was in shock after finishing with a little more than two minutes to spare in order to qualify for Boston.

Preparing for the Boston Marathon was a long process. Rothberger took a little time off after the Savannah Marathon and then started training by running a few half marathons.

To better prepare herself for the hill-filled Boston course, Rothberger participated in the Atlanta Marathon because the courses are very similar.

“I decided to do that marathon to make sure that I was getting my training in and getting the miles that I needed to get in to be able to train for Boston,” Rothberger said.

During the Atlanta Full Marathon in October of 2013, as Rothberger was preparing for the 2014 Boston Marathon, she coincidentally qualified for the 2015 Boston Marathon which she plans on participating in to improve on her time from this year.