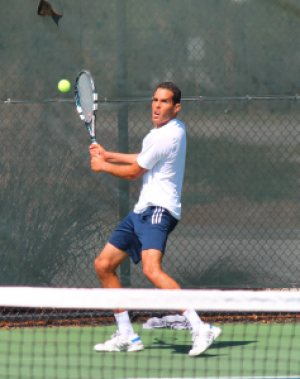 In the quarterfinals of the 2014 Southern Conference Championships, GSU fell to the University of North Carolina-Greensboro 4-0.

Singles play started with Hoffman at the No. 3 position falling to Phillips 6-3, 6-1. DeGroof at No. 4 came after as he lost to Sophomore Daniel Mack 6-4, 6-1. The decisive point for UNCG occurred when Kerrigan was defeated by junior Cameron Smith 6-2, 6-2. Webb, Osorio, and Codina Sala did not finish their singles matches as a result of UNCG clinching the match.

UNCG went on to lose in their semifinals match against Furman University 4-3. It was No. 1 seeded Elon University that defeated Furman in the championship final 4-1 to win the tournament.

The SoCon Tournament marked the end of Webb and Osorio’s senior careers as GSU tennis players. The season may not have ended as the two would have liked, but that was not a deterrence to how the players performed.

As a postseason award, Webb was selected by the other SoCon coaches to the 2014 SoCon First Team All-Conference. His winning record of 5-4 in SoCon play was evidence of his hard effort this season. Doing so at the No. 1 spot further proved how much dedication Webb put into his final year.

The Eagles are keeping next season in mind as they welcomed new players a few months ago. Jose Eduardo Landin Lopez from Mexico, Pradeep Raja from John Creeks, Ga., and Joan Carles Alcala Llinares were three of the new athletes the team added.

Eduardo was nationally-ranked in the top 40 in the 18s division. Pradeep was ranked 26th in Georgia for the 2014 class. Joan Carles has been playing in Spain and his rank was at No. 227. It has been as high as No. 201.

The season ended with the Eagles having an overall record of 5-18. Next year will welcome new changes and new mentalities as the Eagles head into the off-season.