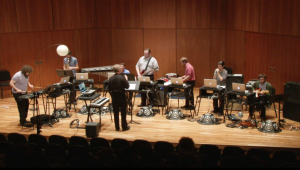 Tomorrow, Georgia Southern University students will be able to witness an exciting synergy of technology and music at Channel Noise.

Channel Noise is a unique electronic music concert that is hosted by the GSU music technology department.

“Channel Noise explores electronic experimental music and combines that with traditional instruments like saxophones and percussion. It tries to synthesize the two. It’s interesting because you hear new sounds. I’m using 47 channels of audio. I just try to do things that are kind of ridiculous, because I might as well,” Eddie Farr, graduate student and composer, said.

The concert will be performed tomorrow night at 7:30 p.m., at the Carol A .Carter Recital Hall, located in the Foy Building. The admission is free and students are encouraged to attend and enjoy.

Channel Noise, now on its 10th iteration, was started in 2009 by John Thompson, Director of Music Technology. Thompson has directed each Channel Noise event, which occurs biannually, and is still proud of what it brings to our campus.

“You won’t hear anything like this in any other concert, anywhere near here, ever,” Thompson said.

Farr’s piece, “Sequenza,” which experiments with feedback delay, has two live saxophones with 47 channels of audio, meaning there will be 47 speakers each controlled individually.

Payen’s piece, “Sleep,” is based on a Bible passage and will contain vocal work, piano, and percussion.

“It’s about how the eternal sleep is coming, but you shouldn’t be afraid, you should embrace it. I set it in Latin instead of English. It’s hopefully going to sound quite dreamy as the text describes,” Payen said.

Special video games that explore interactive narrative will be available for students to play with, before and after the concert, courtesy of graduate student Kristopher Marteem, who created the programming and composed the music in them.

“My pieces are installations. There’s one game where it’s motion controlled and you’re trying to catch balls that fall and there’s one where you’re creating a soundscape by exploring an area,” Marteem said.

Payen said, “Music technology can produce music as well, beautiful music, and not just how it’s perceived as noise sometimes. It doesn’t always have to be conventional; you can use nonconventional techniques and nonconventional equipment and create new sounds.”