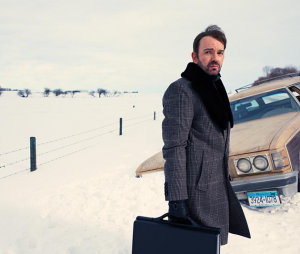 Many movies released today are either remakes or spinoff ideas of older movies. It is far less common for a new TV show to follow this route.

This is what FX has done with its upcoming show,“Fargo,” which is set to air tonight at 10 p.m., and we’re covering it every step of the way with episode reviews and some live tweeting.

The TV show will be an adaptation of the 1996 Academy-Award-winning movie “Fargo” and will maintain the same title as well as the same style of crime-dark-comedy-drama trademarked in the film.

However, the TV series will follow an all new story line, new cases and an entirely new set of characters.

For the TV series, FX has gathered together an all-star cast ranging from Billy Bob Thornton (“Armageddon”) to Martin Freeman (“The Hobbit.”)

The show will take place in Minnesota and begin with a drifter, Lorne Malvo (Billy Bob Thornton) showing up in town and influencing the people, namely a cowardly insurance salesman, Lester Nygaard (Martin Freeman) with his violence and corruption.

For any Freeman fans, this will certainly shed some new light on his acting range. Although he may not look like the 6’4’’ buff, heroic, leading-man type, Martin Freeman has been well recognized in his career for playing iconic heroic characters.

Whether it is the honorable Dr. John Watson in BBC’s “Sherlock,” or Bilbo in “The Hobbit” who left the shire to find adventure and eventually found his courage, Freeman has given life to some of the most famous courageous characters.

So, it should be very interesting for audience members to see him not only play a whimpering timid insurance salesman who gets beaten up on a regular basis and thrown into a trunk, but also to hear the beloved Brit drop his English accent to play a Minnesota native.

“Fargo” has been cleared to release 10 episodes so far and will possibly be renewed for a second season and additional episodes based on U.S. viewership and reviews.

Look for a weekly update on how “Fargo” progresses throughout its first season and whether or not a second season will be a good idea.