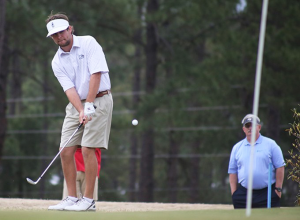 The Georgia Southern University men’s golf team had another stellar performance at the Florida Atlantic University Slomin Center Invitational in Lake Worth, Fla., coming in second just under the nationally sixth-ranked University of Central Florida.

“The boys played great. We had a great team effort all weekend. All weekend long, all five guys were in the ballgame all three rounds,” Head coach Larry Mays said.

Round one posted an incredible score of 278 and the Eagles started the tournament in first place, seven strokes ahead of second place UCF. Seniors Hayden Anderson and Will Evans, juniors Scott Wolfes and Charlie Martin and sophomore Henry Mabbett all competed in this tournament. All five golfers stayed in top 20 positions all weekend.

In the second round, the Eagles were knocked down to second place as a result of outstanding performances from UCF’s Ricardo Gouveia and Greg Eason who both shot a 65. The Eagles continued to stay strong in the tournament with all five guys posting scores between 70 and 72.

“Golf is just one of those games that if you get everyone on the same page, sometimes it can be tough, but when you do great things happen,” Mays said. “That’s what we’ve got right now, all the guys playing good at the same time.”

The Eagle’s finished round three in second place, scoring a 282 with their final score being an incredible seven-under-par. Central Florida took first place and, along with GSU, were the only teams to post final scores under par.

“I think we’ve got the good momentum working in our favor and we’ve got good players stepping up at the right time,” Mays said. “Winning the Schenkel was a huge accomplishment. We’ve got Vanderbilt next week and then we go to conference and then NCAA, so hopefully we’re peeking at the right time and got the guys all on the same page.”

This Friday, the Eagle’s travel to Nashville, Tenn., for the Mason Rudolph Championship. They hope to carry the momentum into the last tournaments of the season and bring home some trophies.