Freshman’s stock has risen to the top 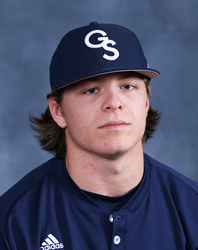 Chapman leads the Eagles (27-15, 9-9 SoCon) in hitting with a .377 batting average. He ranks third in the conference, trailing only Elon University’s Casey Jones and University of North Caolina-Greensboro’s Sean Guite.

The Eagles have six players batting over .300, so for Chapman to rank the highest amongst his teammates may be more impressive than ranking third in the conference.

Players hit hot and cold streaks. At one point Brown had over a .400 batting average for a couple weeks and Adams didn’t get out of the .200’s until early March. These trends are to be expected in baseball.

In the last month however, Chapman has been a consistent hitting machine. His average has not risen above .390 or fallen below .370 since March 19.

He has hit safely in every one of the 39 games he’s started except for seven. His .514 slugging percentage and .429 on base percentage are good for third and second on the team, respectively.

While the team has struggled to put a complete game together recently, no one is pointing any fingers at Chapman. He has exceeded expectations for a freshman.