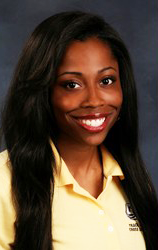 That’s a lot of running, 67,200. That’s the distance in meters from Statesboro to Lakenheath, United Kingdom.

After grabbing her second Southern Conference title in the indoor long jump, the five-foot-two nursing major continued her excellence outdoors. This year she set personal bests in the 100m, 200m and long jump, and ran a leg in the 4x100m, 4x200m and 4x400m teams that broke school records this year.

Walker opened up in an interview during practice to discuss her time at GSU.

BM: Whats been the biggest transition for you coming from Great Britain to Georgia Southern?

Jasmin Walker: The weather. (laughs) The weather, in England, it was always cold…rainy…snowy. Here it’s hot. Well it’s kind of the same. Except it gets hot.

BM: Coming out of high school you said you would focus on jumping, but you’ve been killing it in the relays. How did you feel when you realized you broke so many records this year?

JW: I felt good, felt accomplished. I worked hard this year. I never really had to work out that hard in high school but came here and got an eye opener – you got to work hard if you want to win.

BM: I see. You won Freshman of the Year and kept improving. What’s your next goal heading into conference championships?

BM: A Star & Stripes article written about you in 2011 mentioned what fueled you through your senior year: losing a race by .02 seconds to Tiffany Heard. Do you remember that?

BM: So what fuels you now? What pushes you to be the best, separates you from the pack?

BM: Yes you did. Now you compete in a variety of events. Any chance you’ll add one heading into your senior year?

JW: If coach lets me…

One. That’s the only number on Walker’s mind heading into the conference meet, as she gets another shot at grabbing gold, school history and podium status.