Gearing up for SoCon tourney: Interview with Marco Osorio 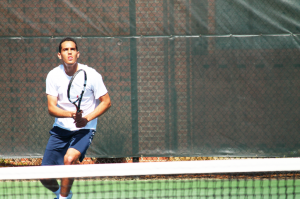 A challenging season has to be met with players ready for adversity, and seniors are no exception.

Senior Marco Osorio has been an Eagle since his freshman year. Now that it is coming to an end, he is ready to finish strong.

Having won four out of his last seven singles matches, Osorio has been working to do the best he possibly can. Recently, on Saturday, Head Coach Nick Zieziula gave Osorio the opportunity to play in the No. 1 position against the University of South Carolina Upstate.

Typically as the player in the No. 4 position for the Eagles, playing as the No. 1 for the day showed Osorio’s hard work paying off. Although the team may be 3-15, tennis is widely an individual sport. Osorio, like the other Eagles, does what he can to contribute to the team, but he knows everyone has their own mentality to focus on.

With the season, and his college career, nearing an end, Osorio is doing his best to keep his mind off the pressure.

“I need to stay focused on those day-to-day, and point-to-point,” Osorio said.

Maintaining a positive attitude has helped Osorio perform at a high level. The team has not won every match this year, and that has been a discouraging aspect for them. It has not kept Osorio from having faith in his teammates. Considering matches against teams like Appalachian State University and Mercer University, Osorio always maintains his optimism.

“I walk into these matches with complete confidence knowing the other guys [teammates] would win,” Osorio said.

At the end of the day, even if the Eagles cannot pull out victories, Osorio never stops believing in them. The team always knows to stay strong and keep moving forward, no matter what level the adversity is.

Osorio is from Tegucigalpa, Honduras, and the team has players from Belgium, Brazil, England, and Spain, but that is part of the Eagles normal experience.

Diversity, itself, is not quite the best definition for it, as Osorio said, “all of us from different countries are used to it.”

Instead of focusing on the diversity of the countries, Osorio said it is more about elements such as diverse personalities and nationalities.

“Communication is something you learn from a team like this,” Osorio said. “Especially in a tough season, you get all these different opinions and perspectives.”

When half the team knows how to speak in Spanish, knowing how to communicate is necessary. It has helped the team bond and it has bettered the way everyone understands each other.

As the final season for Osorio, everything he has been doing carries a certain weight. When asked about his plans for the rest of the season, he said, “my goals, personally, for SoCon, are to keep my positive attitude and keep my tenacity.”

“I don’t want to get too emotional,” Osorio said. Narrowing in on the idea of this season being his last risks slowing him down.

Osorio intends to stay focused, play better mentally and continue competing in his matches as if they were nothing special.

The team travels this weekend to Chattanooga, Tenn., to play against the University of Tennessee at Chattanooga and then they go to Birmingham, Ala., to face Samford University.

Osorio mentioned that Chattanooga has been a competitive team in the past. They have lost some of their top players to graduation and such last year, so the Eagles certainly have a chance of defeating them this year. Just as well, Samford has been forfeiting one singles match per series, giving other teams a head start against them.

Osorio likes the Eagles this weekend. He knows these will be great ways to get momentum before facing Georgia State University and The Citadel in the following week.

The Eagles will be in Chattanooga for their meet on Friday, March 4 at 2 p.m. They will then be in Birmingham that Saturday, March 5 at 2 p.m.