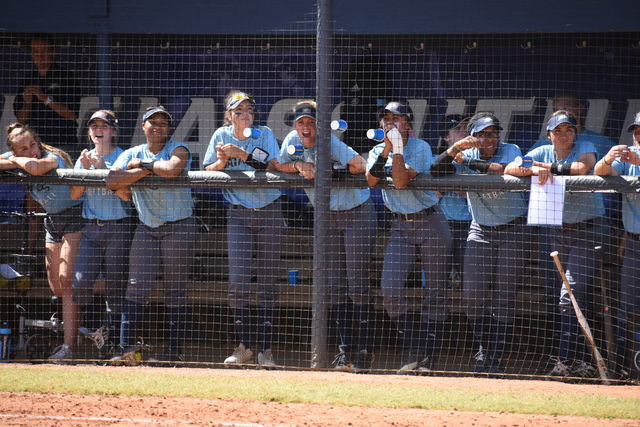 The Georgia Southern softball team leans over the gate watching the next Eagle at bat. The team will begin regular season with the Bash in the Boro tournament this weekend.

STATESBORO — The Georgia Southern University softball team opens their season this weekend with a new mindset and a few new faces on the coaching staff. Coming off of a 23-28 season complete with a brief appearance in the conference tournament, the team returns five seniors to the roster.

The Eagles said goodbye to a whopping six seniors last season, including outfielder Shelby Wilson who led the team with 37 RBI.

This off-season, Head Coach Kim Dean wanted to push for the team to grow together off of the mound and learn to work together as a team. This will be just her second full season in Statesboro, as she was previously at Armstrong State, and she went through a grueling hiring process to fill vacant spots on the coaching staff.

“We obviously have two new coaches, we have a lot of new kids,” Dean said. “So just really trying to get us to understand that that success is built from … within our locker room, more importantly. We really focused on that and … the fundamentals of the game.”

The team introduced Dani Price from her alma mater, McNeese State, and Brock Van Faussien from the University of Pittsburgh to the softball program during the off-season break and both have received a warm welcome by the team. The seniors raved about the positive contributions they’ve made in the few short months that they’ve been a part of the program.

This book’s main ideas have been implemented by the program from the team to the coaching staff to the extended staff, including the strength and conditioning coach and the sports psychologist.

“If you put a carrot into hot water, it softens, but a coffee bean is the only thing that changes the water,” Dean said. “We don’t let the water change us, we change the water for the better. We really have taken that full stride.”

The team exchanges coffee beans every practice as small tokens of affirmations for their teammates, on or off the mound. Simple actions like giving each other rides or cooking a team dinner for each other is worthy of a coffee bean and it has helped the team to build a stronger bond.

Five seniors are at the forefront of this movement within the program, including Mekhia Freeman, Shayla Smith, Alia Booth, Sydney Horton and Ellington Day. Dean emphasized that the team’s goal this season was to create a family atmosphere and enjoy the struggles that the season is bound to bring as a collective group.

Freeman was selected as a Preseason All-Sun Belt outfielder and was shocked by the league’s decision because she did not feel like last season was anything special as an individual. She was proven wrong by Sun Belt officials.

The fall season was cut short due to weather, but Dean does not think that the schedule change hindered the team in any way, and infielder Shayla Smith echoed the sentiment.

“The few games we did have really showed our potential,” Smith said. “We’ve all established these great relationships, so I’m excited to see on Friday how that portrays in the game.”

When it comes to pitchers, GS has a plethora of choices for who can take the diamond. There are currently six pitchers on the roster and Dean plans to rotate them frequently.

On the flip side from last season, there are many away games on the schedule, meaning a travel-heavy lifestyle for the next few months. Three Power 5 schools will make a trip to Statesboro, and at the end of the season, rival Georgia State will host the Sun Belt Conference Tournament.

The team will play host to Hartford, ETSU, Rutgers and Army West Point during Bash in the Boro on Eagle Field this weekend. Conference play will not begin until March, so the team has ample time to prepare this young roster for a strenuous Sun Belt schedule.