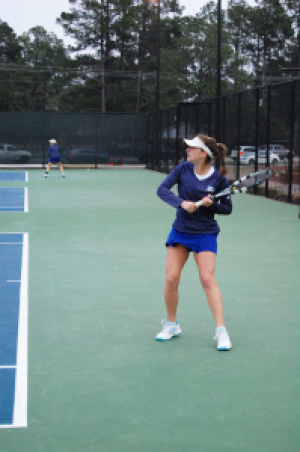 Georgia Southern University tennis star Jordana Klein, originally from Alpharetta, has stood out at every level of her tennis career.

“I always wanted to play a sport in college, I just had to decide between volleyball and tennis but I was mostly always leaning toward tennis,” Klein said.

Klein attended Murray State University in Kentucky for her freshman year of college where the tennis team compiled a 12-11 record. Klein played third in doubles and singles. She had a record of 12-10 for singles and 13-10 in doubles for the season.

“I got a scholarship to Murray State and about two months before I was supposed to leave I received a call saying that my favorite coach, the one that recruited me, had decided to retire,” Klein said. “So I stuck around for a year but just realized it was too far away. I looked into Georgia Southern because I knew they had a really good tennis program, so that’s why I decided to come here.”

Klein came to GSU in 2012 where she continued her strive for collegiate victory as a sophomore. She started off her 2012 fall season by winning the Auburn Invitational in the finals. When the Eagles traveled to Kennesaw State University for the Kennesaw Fall Classic, Klein registered an impressive 3-0 record in doubles play as well as picking up singles wins against Western Carolina University and KSU.

Unyielding, Klein also went on to win the Augusta Challenge, putting up massive wins and a remarkable 3-0 record in each event.

In the spring of her sophomore year Klein played 22 singles matches for the Eagles. All at the No. 2 position she earned a team-leading 13 wins of the year for an overall record of 13-9 as well as 6-4 in the Southern Conference.

As a GSU junior, Klein has had a roller-coaster of a season starting off very strong and slowly depreciating in wins as the season wears on. She now holds an overall record of 7-9 and a SoCon record of 1-5. She hopes that the upcoming matches will help improve her and her team’s overall record in the impending weeks before their last season in the Southern Conference comes to a final close.

Klein said, “I think the team knew that we would have a pretty tough mid-season schedule but also that if we stuck with it and kept playing hard we could turn it around and I think our success can continue into the rest of our conference matches.”