Ready or not: Adrenaline Show Choir takes over the PAC 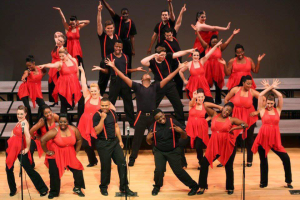 This Saturday, students and the Statesboro community will have the chance to witness one of Georgia Southern University’s most entertaining groups of singers and dancers of the past seven years: Adrenaline Show Choir (ACS).

Adrenaline Show Choir will put the “perform” back in “performance,” Carrington Kelso, public relations chair of the show choir, said.

Adrenaline will be at the Performing Arts Center on Saturday. The show will start at 7 p.m. and tickets will be $5.

“There will be a lot of variety and diversity in it,” Kelso said. One of the biggest songs of the night will be Bon Jovi’s rock anthem ‘Livin’ on a Prayer’ but the show also has songs from other genres like contemporary music and pop. The goal of the show is to tell a story, Kelso said.

“We pride ourselves on performing and making sure the crowd is entertained,” Kelso said, which is why Adrenaline Show Choir has practiced and rehearsed for seven months to perfect Saturday’s show.

“We perform mostly barbershop,” Felipe França, president and co-founder of Pitch Black, said, “It’s usually four voices – they are so tied together that it sounds very different.”

So different, in fact, that telling them apart is somewhat difficult, França said.

Barbershop is a sound specific to a capella groups and was popular in America in the early and mid 1900s.

“I love engaging the audience, making them smile, making them sort of enjoy themselves,” França said. “Especially with little things we add in with the songs. Funny things – we’re all about that. Expect to laugh, I’ll tell you that much.”

Laughter and entertainment are just two of the things that can be found at Saturday’s show. “Finals are coming up right after our show so we want to take a little stress off of everybody. Just come out and enjoy a good show,” Kelso said.