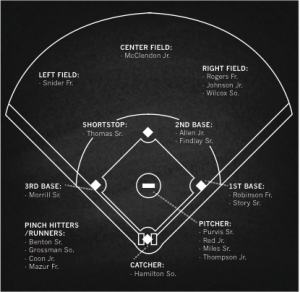 The star pitcher is exhausted, the go-to-hitter has a hurt shoulder and the center fielder got hit in the face with a ball, hypothetically speaking of course, what does a team do? Do they forfeit? Do they just throw in the towel?

The Georgia Southern University softball team would not be a team to just throw in the towel because this team is more than equipped when it comes to filling in positions anywhere on the field. Not only are there upperclassmen who execute their job with ease, due to experience, but there are also freshmen stepping up producing to the same precision.

“I’m really confident [in the depth of the team]. We win and lose as a team. It could be that one simple pinch run that was scored and things like that. So, everybody is important and it’s nice to see everyone step up when they need to,” Head Coach Annie Smith said.

This past weekend, the Eagles played a conference series against Western Carolina University, and with a doubleheader on Saturday, GSU showed that depth on several different levels.

GSU’s depth extends from the circle all around the field. Each outfield position has at least two players that are more than capable of doing the job at hand. While in the infield, the positions fall in a range from freshmen to seniors.

Third base and shortstop have the experienced seniors who consistently make plays in these positions, while second base is a junior, first base is a freshman and at home plate, the Eagles superstar catcher is a sophomore. This shared influence on the field allows GSU the opportunity to possibly be the team to win three Southern Conference championships in a row.

“For us philosophically, I’m like it’s okay we are going to make some mistakes, just never panic. So, it’s been don’t break. It’s a matter of staying focused, and it can be hard,” Smith said.

In the second inning of the second game this past weekend, the Eagles did make some mistakes, two errors to be exact, and WCU took advantage of that. But, like Smith said, this team does not panic.

After that point, the Eagles’ defense only allowed one more run for WCU and ended up tallying nine runs to win the game, four of which were in the bottom of the sixth inning. Smith’s confidence in the depth of her team has a lot to do with the fact that GSU had four hitters with at least two hits in the second game.

“We just need to stay focused, and continue doing what we’re doing. We need to play our game, and as long as we do that, we’ll be okay,” Smith said.

The Eagles will continue their conference play on the road against rival Appalachian State University this coming Saturday and Sunday in Boone, N.C.