One for the books: Track & Field season recap 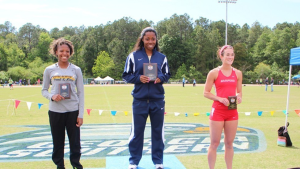 That mantra holds true for

The Eagles wrapped up the regular season at the elites-only Spec Town Invitation in Athens yesterday.

With the 2014 outdoor regular season behind with the rest of the pack, it is time to point out highlights from the year in review.

Inclement weather plagued the Eagles all season, limiting which events saw time against actual competition. The relay teams saw the most cancellations, and head coach Marlo Mincey acknowledged that weather and minor injuries across the board forced adjustments to their consistent training regimen.

Those obstacles proved to be minor for the No. 1-ranked team in the conference. The 4×100, 4×200 and 4×400 relay teams all posted times that rank top 10 in university history this year.

With established Southern Conference champions such as junior Jasmin Walker and grad student Sherrill McFarlane setting the gold standard, freshman Asha Stegall brought her talents to GSU and showed that she belongs in elite company.

The Alabama-native made her first impression a lasting one, tying the university’s third fastest time in the 400-m dash in her debut at the FSU Relays. Stegall proved her worth all season, shattering records in the mid-distance events and relay.

“When it comes to my record, it’s not going to last long,” Mincey said. “She has the potential to reach the national championship meet.”

What separates this year’s team from its predecessors is the focus and commitment to breaking records, Mincey said. A slew of athletes set personal records each meet, including 16 set at their last meet.

Heading into the post season, the Eagles are in prime position to bring home conference titles in a number of events. Look for McFarlane to dominate the distance events and Walker to bring home the crown in long jump.

Senior Dana Edwards has made strides with her performances in the hurdles this year. Look for her to bring home the crown in the 400-m or 100-m hurdles. Most points scored will come from the relay teams, the Eagles’ strongest events by far.