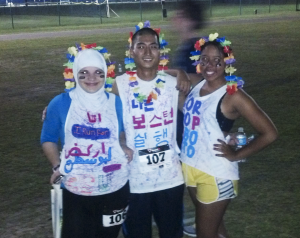 The 2nd annual “Ready, Set, Glow 5K” will be put on by the Georgia Southern University Sport and Exercise Psychology Club from 8-10 p.m. on Friday at the RAC Pavilion.

The race will be relay style with teams of three people competing.

The Miracle League of Statesboro and the GSU Sport and Exercise Psychology Club will reap the benefits of this year’s “Ready, Set, Glow 5K.”

“The goal of the Miracle League is to construct baseball fields tailored to the specific needs of individuals with physical and cognitive disabilities. These facilities include modified equipment tailored to allow those with disabilities to participate fully in the sport of baseball. In addition, one of the initiatives of the Sport and Exercise Psychology Club is to promote an active and healthy lifestyle among the GSU and Statesboro communities,” Sara Rothberger, event coordinator, said.

The entry fee is $45 per team ($15 per person) and includes t-shirt and glow sticks.

Participants are asked to designate a team captain to register their three person team.

Racers can register online until 5 p.m. on Thursday and from 6-8 p.m. on Friday at the RAC Pavilion during packet pick-up.

Rothberger said,”Each team of three will designate the order of the runners, and each runner will complete a one mile loop around MC Anderson Park. Glow sticks will be used as relay batons and must be passed between runners at the start of each lap.”

The top male, female and co-ed teams to cross the finish line will be awarded.

But they will not be the only ones to receive prizes.

The team that is “Best Dressed” in glow attire will also when a prize.

“I think this 5k will be really fun. I also like the idea that the money is going to be benefiting people who really need it. Anything that allows people to participate and feel included in sports that they couldn’t have before is a good thing,” Allegra Johnson, sophomore international studies major, said

Throughout the event DJ Vince Viga will be keeping runners upbeat.

Fuzzy’s Taco Shop will also be providing food to participants after the race.